On Wednesday, contracts on the four major US indices—the S&P, NASDAQ, Dow and Russell 2000—were down at time of writing along with European stocks which ended a three-day advance after mixed corporate results and weaker commodity prices pressured markets.

Treasury yields slipped and the US dollar climbed.

The pan-European STOXX 600 Index fell, along with miners, which tracked a drop in raw materials, including aluminum and iron ore, and oil. 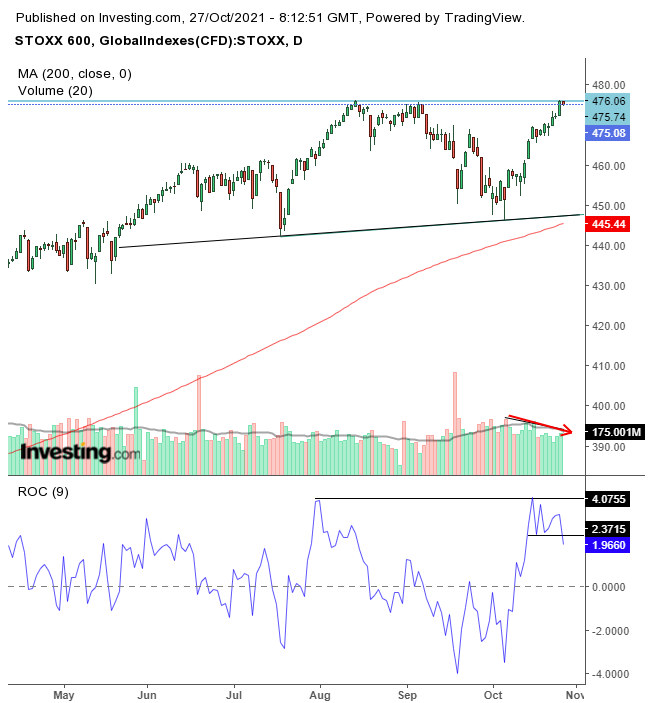 The index retreated today from record levels. Yesterday’s high was 476.06, the benchmark’s highest level since it hit 476.16 intraday on Aug.13. The closing price on Tuesday was 475.74, just a hair below the Aug. 13, 475.83 record close. The index appeared to find resistance at these levels, as can be seen via both the diminishing volume in its recent rally since the Oct. 6 low, as well as the falling momentum.

Deutsche Bank (DE:DBKGn) sold off this morning, losing more than 3%, after the Germany-based financial institution missed on earnings. Shares of Spain’s Banco Santander (MC:SAN) dropped despite seeing higher profits in the third quarter, perhaps because investors saw a chance to take some profit. 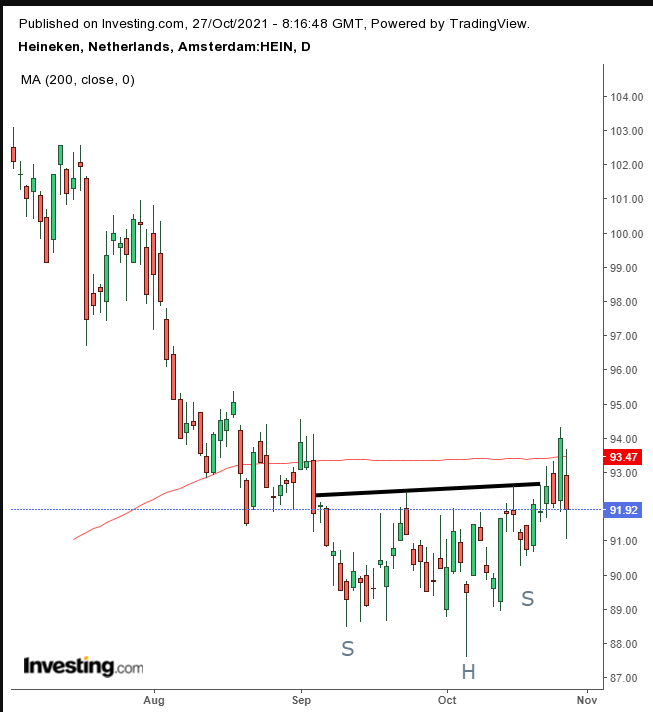 Technically, the stock is struggling to complete a small H&S bottom, protected by the 200 DMA.

The stock of German sportswear manufacturer Puma (DE:PUMG), gapped up by almost 3%, pushing shares forward toward its fourth straight weekly gain, after the company lifted its sales forecast.

Earlier Wednesday, Asian equities sold off after Australia’s inflation remained high, exacerbating fears that it will get out of hand and disrupt the much hoped for economic recovery. Australia’s ASX 200 barely rose, gaining only 0.07%. An early advance was offset by weakened mining stocks.

The steep domestic inflation figures coincided with a steep decline in retail giant Woolworths Group (ASX:WOW) sales. All things considered, the fact that the ASX 200 was able to record a gain at all may be considered impressive, under these circumstances. It was the benchmark’s 6th straight advance.

The Australian dollar slipped into the red after initially gaining on the theme of rising rates. The country’s 10-year bond yield also gave up most of an advance. 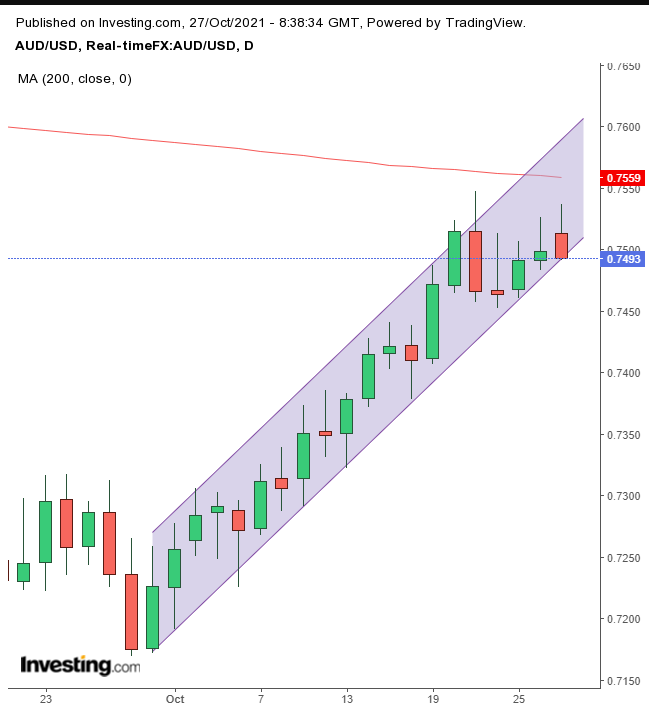 The AUD/USD appears to have found resistance at the 200 DMA. The Aussie has been unable to overcome this barrier since Oct. 20. For now, however, the price is finding support at the bottom of a rising channel.

Another headwind for Asian equities: fresh concerns about escalating tech-focused regulations out of Beijing after, “China’s internet watchdog said it planned stricter registration rules for younger net users.” That triggered the sharpest decline in seven weeks for Chinese tech shares.

Japan’s Nikkei dropped 0.15% amid worries about central bank responses to inflation. Still, traders managed to trim a much steeper decline, to the tune of 0.8%.

US 10-year Treasury yields were down for a fourth day, as investors routed funds out of stocks and into bonds. 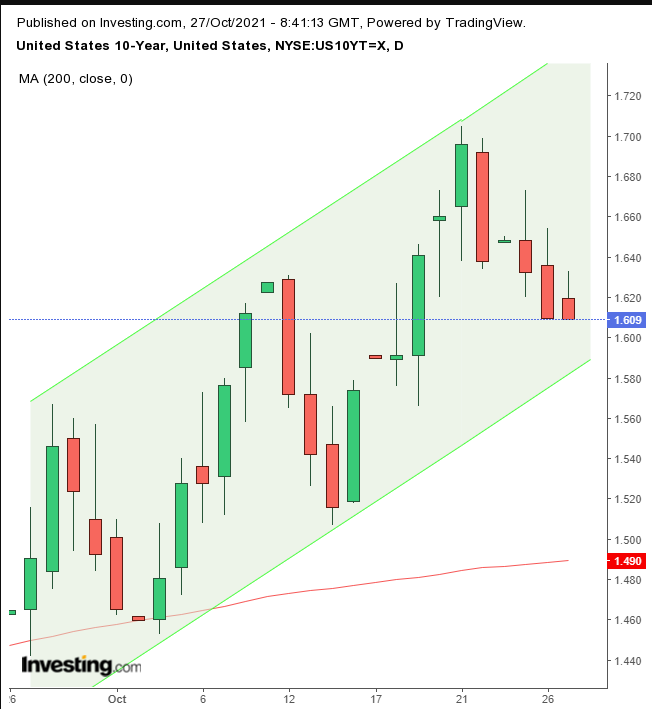 The move is technically justifiable within its rising channel, supported by the 200 DMA.

The dollar climbed for the third day in a row. 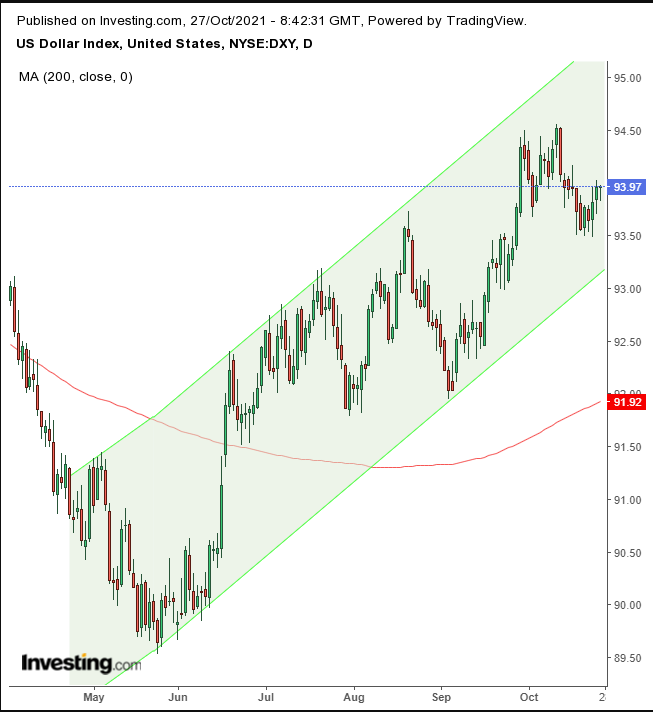 The global reserve currency may be heading back toward the top of its rising channel, after finding support by the 93.50 level since Oct. 19.

Gold slipped for a second day. 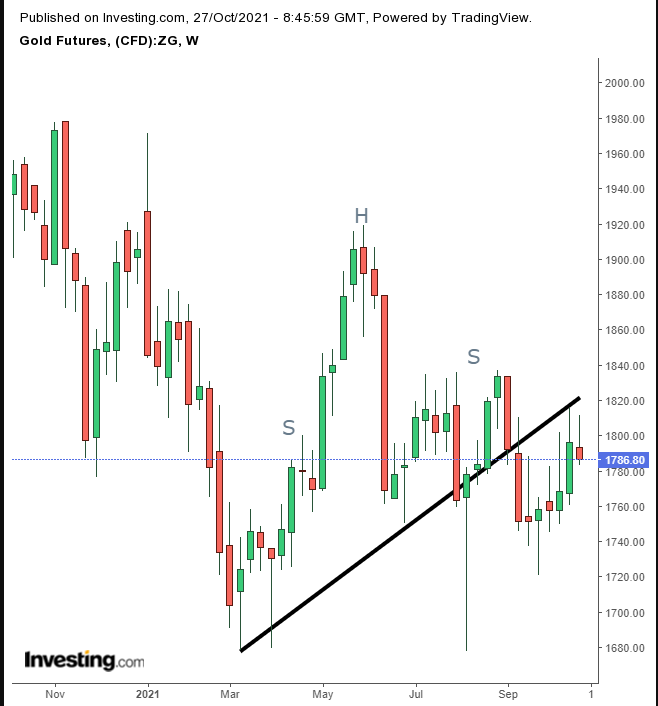 The precious metal’s current decline—if it lasts till this week’s close—will put a halt to its two-week rally. This may be a signal that the return move is over, and the weekly H&S continuation pattern will go into effect pushing the yellow metal lower.

Bitcoin fell back below $60,000, per our forecast earlier this week. 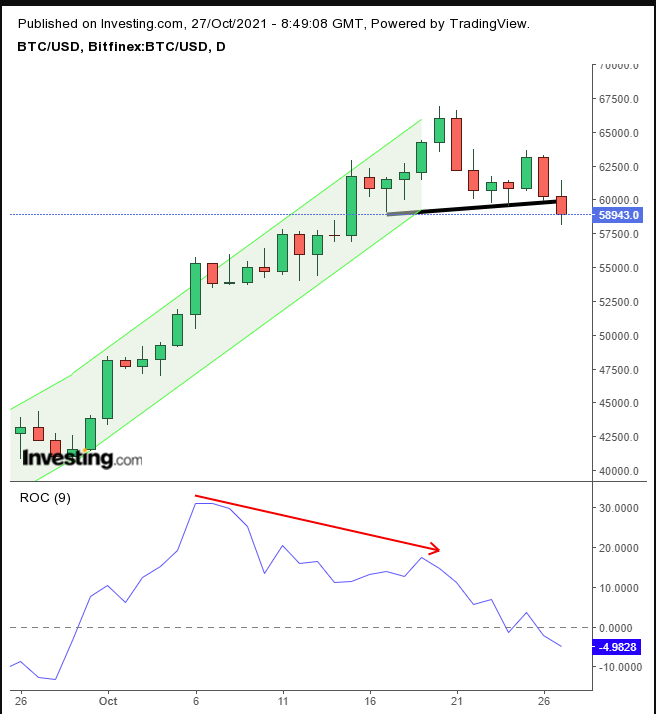 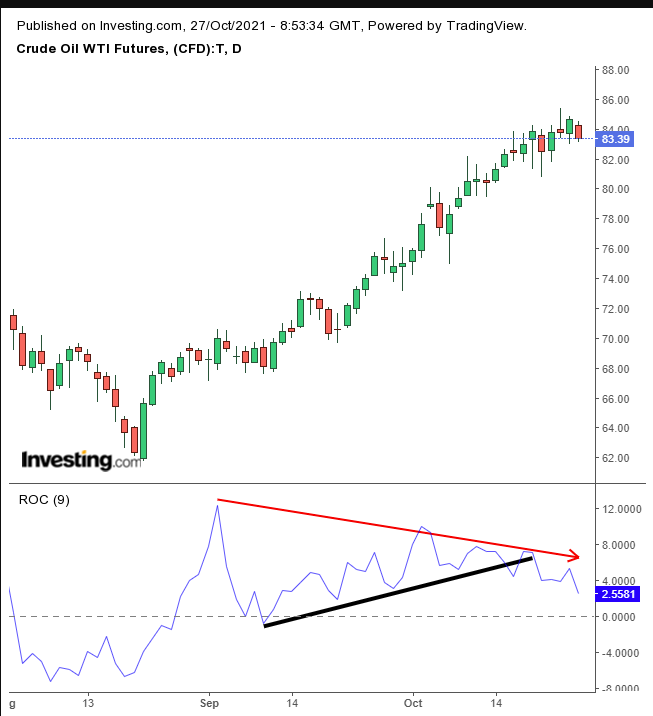 WTI has been falling, now tracking momentum that’s been dropping since September. More recently, the commodity has failed its rising trend.

The Four Finance Issues That Everyone Struggles With